Mom of Three: From Bullied to Bodybuilder at 53

admin
Ruth pledges to spend her year becoming a bodybuilder and discovers what it takes to power through an intense challenge on "This Time Next Year."

When Ruth Anne Phillips’ journey to becoming a competitive bodybuilder at age 53 started with a #MeToo situation.

A few years earlier, she had landed her dream job as a first responder in Virginia after applying all over the country. But her celebration was short-lived as she quickly found herself on the outs with her mostly male colleagues, who she alleges bullied her. She stuck it out for two and a half years before quitting, despondent.

“I’d put everything I had into it, and I felt like such a failure,” says Phillips, who now lives in Arkansas. “I spent three years eating myself into a coma, shutting myself off from my friends, and becoming almost housebound.”

Then nearing 200 pounds, she saw an email notice seeking candidates for Lifetime’s “This Time Next Year,” and the next day decided to chase another dream: a literal one.

“That night I went to sleep and had a dream that I should apply for the show and do a bodybuilding competition,” says Phillips, a married mother of three and stepmother of two older children who’ve made her an unlikely great-grandmother.

One year and 65 lost pounds later, Phillips won a third place medal in the over-40 division at the St. Louis Gateway Naturals bodybuilding competition. Now back at work as an insurance adjuster and still in top shape, she told us how she transformed her body—and her outlook. 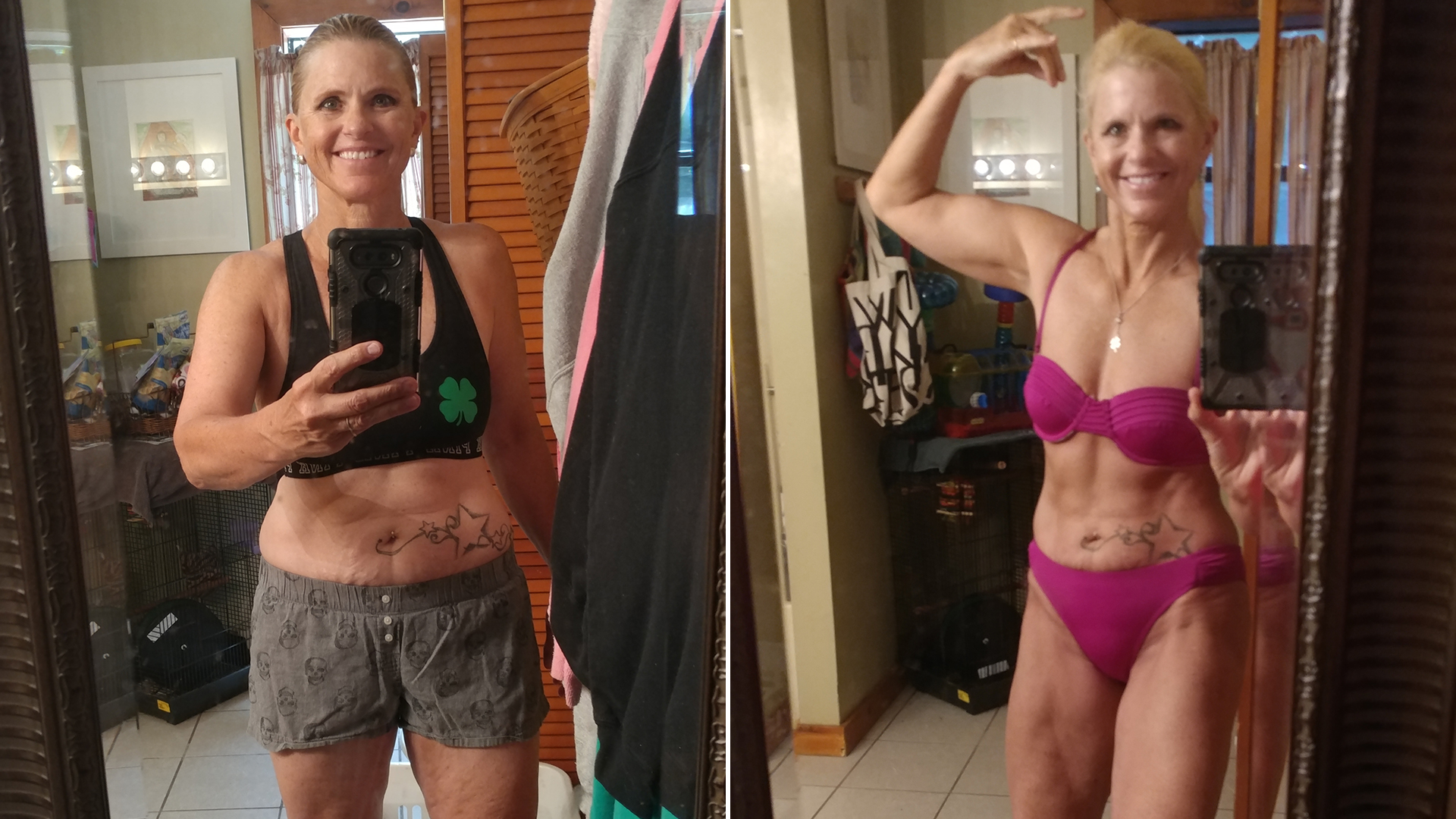 “I’m Going to Try Everything”
I started out doing things I liked, like mountain biking. I tried to go to the end of the road and the first time I don’t even think I made a mile. I thought I was going to have a heart attack. I was like, I’m going to try everything. I tried fat rollers, Fitbit and yoga. I signed up for a weightlifting competition, a racquetball tournament and a human foosball tournament. And I found a really great group of friends playing pickleball. Ninety percent of the time I’d be, like, “Why did I do this?” But I’d do it.

Workouts Become a Second Job
I knew I needed a trainer, and I found Todd Confort at a gym in Ash Flat, an hour drive away. I started working with him for $20 a session. I worked out five days a week, for an hour to an hour and a half. About six months in I started to double that. Toward the end, I was doing a minimum of 28 hours of cardio and weights a week. It was like working another part-time job. I’d come home after a brutal day at work and just want to curl up in a ball, but instead, I’d go to the gym, sometimes at ten o’clock at night. Sometimes I’d get home at one in the morning, and then get up and do it again.

Addicted to the ab wheel
You can buy one for under $10, and it will kick your butt. I call it the ‘Wheel of Death.’ It really helped define my back and stomach. I did it every other day – three sets of 50. I probably started with 15.

The diet: goodbye sugar, hello lettuce
I immediately drew a line in the sand: no more chips, no more candy, no fried food, no glasses of wine. I lost those first 20 pounds pretty quickly. I’d buy bags of edamame, and if I feel like I need to binge I’d eat a whole bag. I ate a lot of fish, mostly salmon, and cans of tuna for lunch. I bought premixed high protein shakes. And I’d have these big bins of salad in the refrigerator. If I needed to eat something I’d always have that salad with balsamic vinegar. 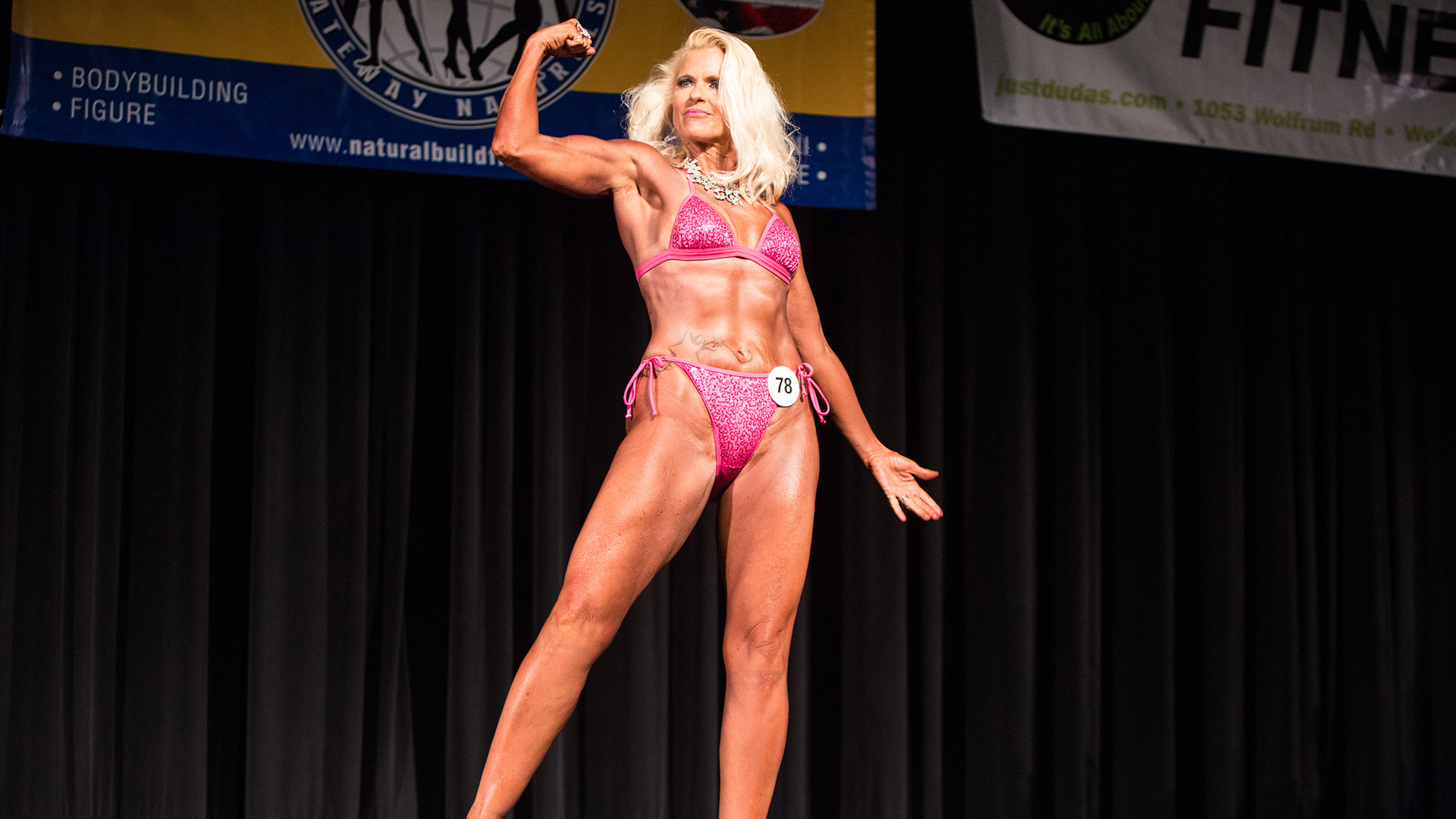 “I’m so hungry”
About four months before the competition, I tried to limit myself to 1500 a day. As the show came closer, I cut my intake to 1000. In the final weeks, you literally have to eat 500 calories a day, and not drink much water. It was terrible. People would ask, how do you feel, and I’d say “I’m so hungry.” I must have said that a thousand times.

Hitting a wall
There was this moment when I had a breakdown. When you lose a lot of weight you’re feeling good. Then I wear shorts to the gym — and I go in and see every dimple in the mirror. I’m supposed to be wearing a little bathing suit in front of people in less than three months, and I’m thinking I can’t do this. I started crying, and I sent an email to the producer and I’m like, I’m out. Finally, I figured I’d gone this far, I might as well see it through. But I had to let go of this idea that I had to be perfect.

Victory!
I had so many self-doubts along the way, right up to when I was onstage. I was so nervous. But I got through it, and toward the end I heard Todd let out a whoop, and everybody started clapping and I felt that affirmation. I don’t think I stopped smiling for hours. My husband was in Florida, working, and I called him and I started crying. I was walking on cloud nine. I felt invincible.

“My Life is So Much Better”
I’m still working out and eating healthy. And my life is so much better than it was. This whole journey wasn’t about losing weight. It was about gaining strength, emotionally and physically. Maybe, after all this, I can offer a hand to someone who needs it. I can take all of the love and support I received and pay it forward.

— As told to Chris Erikson