What Nobody Talks About When We Talk about School “Bathroom Bills”

It took me a while to recognize my child’s strange after-school ritual: Max would rush through the door and without so much as a hello, race to the bathroom. Max, then a first grader and well past the “potty emergency” age, was dropped off at my office by his friend’s mom, because as a small business owner, I couldn’t leave early enough for school pickup. I didn’t think much of it that afternoon, but day after day this pattern became clear: The front door opened and closed quickly and little feet would scurry down the hall as fast as they could go. What seemed like an eternity later, my baby would reappear, asking me in his sweet little voice what kinds of snacks I had in the break room. Once I noticed the pattern, it took me a little while longer to realize that he was always scurrying into the men’s room, even though the women’s room was closer.

“Sure,” you’re probably thinking. “Your son wanted to use the men’s room. That’s where boys belong.”

Except when all this was going on, I still thought that this child was my daughter. It took months and months more for me to begin to realize that my baby wasn’t a tomboy—he was a transgender boy, and that there was actually a big difference between the two.

But let me back up because this story doesn’t begin with a bathroom break. This story begins at the age of two, when my child told me that he was a boy. To be honest, two-year-olds like to pretend that they’re lots of things, so I chalked it up to playing another round of make believe. He hated wearing dresses and having long hair, but plenty of tomboys prefer Batman to ballet, so I didn’t think much of it. But when he was four, he surprised me when he asked, “Mommy, can scientists turn me into a boy?”
I stopped breathing for more than a few seconds. How long had he been wondering this before he put it to words? Was it possible this was more than just dress up?

Like many parents I know, I encourage both of my children to define themselves from the inside out, not the outside in. I was perfectly happy to follow my child’s lead with short haircuts and Spider-Man pajamas. When he started kindergarten, I made sure to arm him with appropriate responses to his classmates’ questions about why he had “boy” shoes when he wore his favorite Star Wars tennies to recess.

And yet, that question, “Can scientists turn me into a boy?” kept nagging at me. Back then, I didn’t know the word “transgender,” and it certainly had never crossed my mind that it was something that a kid could be. But through persistence (on Max’s part) and prayer (on mine), I started to do my homework, delving into what might be going on with my kid’s gender identity. I found resources from the American Academy of Pediatrics (not to be confused with the American College of Pediatricians, a fringe organization that has been designated as a hate group by the Southern Poverty Law Center) and well-researched articles from around the world that helped me better understand that gender identity begins at a very young age, and that being transgender isn’t a thing anyone chooses – it’s a thing that some people are.

I have to admit that I didn’t believe any of this at first. I didn’t want to, especially because as I was learning the science of gender identity, I was also learning about the lack of support transgender people are subject to on a daily basis. Hate not only from society at large, but also from the very people who should love and protect them the most. This daily discrimination and mistreatment is heartbreaking. In fact, 41 percent of transgender youth have attempted suicide at least once, according to surveys conducted by The Williams Institute.

But despite the potential challenges Max may face in the future, he was facing a very real, very practical challenge to his academic success right then: Let’s face it, it’s hard to focus on your books when all you’re focused on is your bladder. 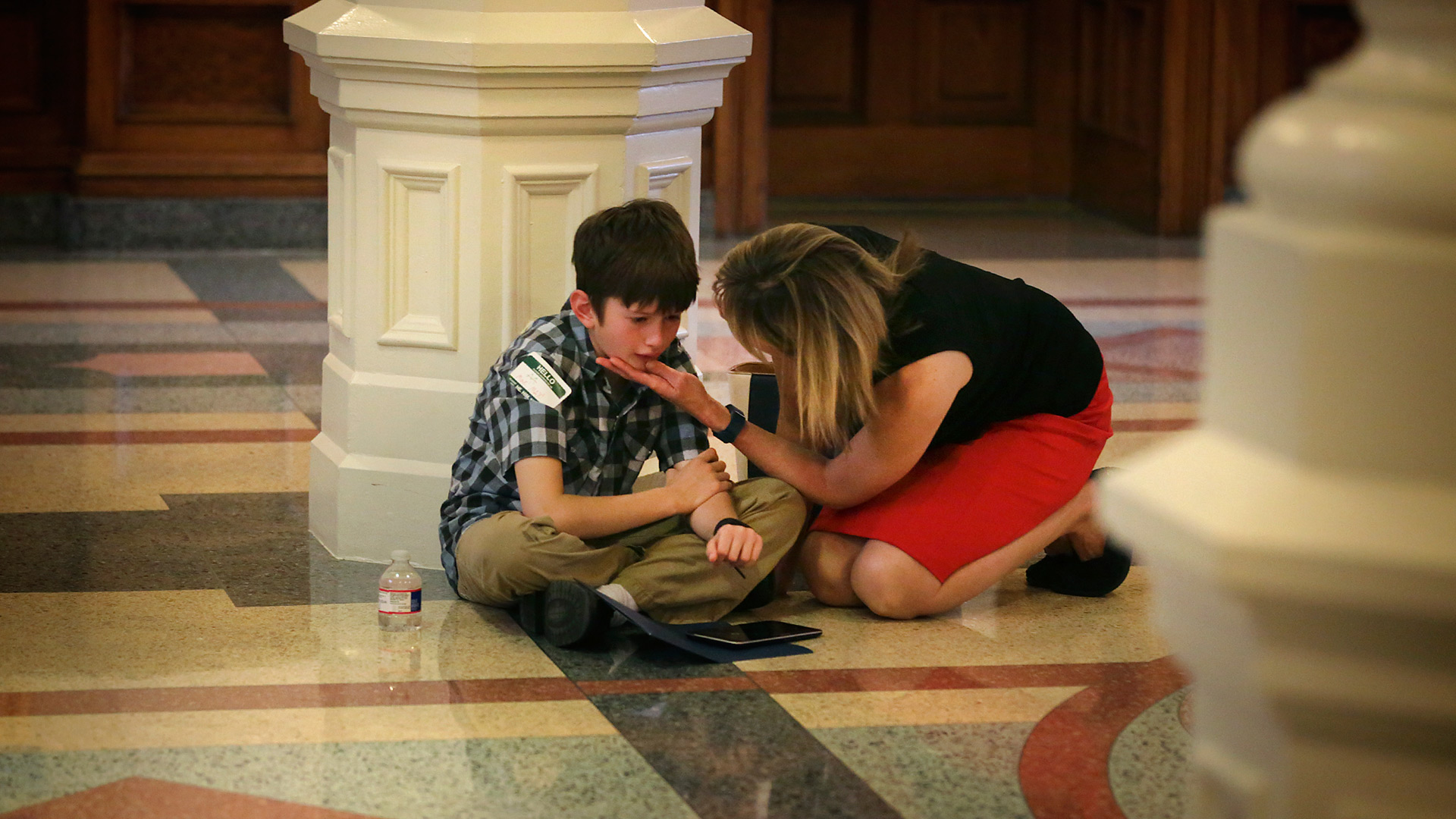 The viral photo of Amber Briggle consoling her son Max on the floor of the Texas State Capitol. / Photo: Bob Owen/San Antonio Express-News via ZUMA Wire

Around this time, his teacher called us in for a meeting to talk about behavior issues that he had been noticing in class. The way my child would hide in a corner when it was time to line up at the door. How he would squirm on the rug during story time. How he was just more irritable than usual. These issues seemed to carry over at home, too. Max would lash out and seemed to have a hard time focusing, more than what seemed usual for a child that age. Something was definitely hurting him, and if we didn’t figure out what was happening, he was going to need to repeat first grade.
So I finally sat down with him. I thought about that daily scurry to the bathroom in my office. I asked him if he was using the potty at school. “No, Mommy,” he replied with a hint of guilt, fearful that he had been doing something wrong.
“Why not, Doodlebug?”

Bless his little heart. This is what happens when we play gender police. Is he too masculine in his appearance to use the girls’ room? Or is his biology too feminine to use the boys’ room? Can’t we just trust that he’s a good kid in search of a toilet, so he can get back to class as quickly as possible and doesn’t miss out on story time and learning his state capitals?

The conversation I had both avoided and prepared for years was finally here. As long as we were on the subject of bathrooms, I dug a little deeper and asked him how he felt inside his heart, whether he was a boy or girl or a little bit of both. What he revealed—that he knew he was a boy—changed everything and nothing at the same time because my child was just as miraculous and perfect on that day as he was on the day he was born. Nothing about my precious baby changed at all, except his name and pronouns. If anything, he has in the days and months since, become a more confident, outgoing child because he doesn’t have to pretend to be something he’s not. He doesn’t have to try to please us by being a girl because he knows he is loved unconditionally, exactly as he is.

We worked closely with his teachers, and Max went back to school with a new name, pronouns and a bathroom that was best for him. I noticed that a few people stopped calling me, but Max didn’t lose a single friend because kids know that whether Max is a boy or a girl, he’s still fun to play with on the playground. And at the end of the day, isn’t that what matters most?

We got Max’s report card back a few weeks later and weren’t surprised at all. After all that time in school, Max’s grades finally reflected what we already knew about him: he was a bright, articulate, inquisitive child, who could succeed at anything if he only felt safe and supported in his environment. His hardest subject until that point was reading, but three weeks after Max was able to be himself at school (and everywhere else), his reading scores jumped three grades and he’s continued that trajectory ever since.

This isn’t the journey I expected when I became a parent. But like any good parent, I will love and accept my children for exactly who they are, not who I expected them to be. To his credit, Max is the same that he’s always been. It’s the grownups in his life who have transitioned: Using male pronouns and a new name, seeking out professionals to help us navigate what’s around the bend when he hits puberty, and advocating for him when lawmakers try to treat him as a second-class citizen. We started with the bathrooms at my own office, which now have “Gender Neutral Restroom” signs on them. But Max doesn’t rush to them like he once did. He doesn’t have to anymore. Most days, we have a snack and talk about his day first.

Amber Briggle is a Denton, TX-based mother of a transgender child. A photo of her consoling her son in the State Capitol went viral when it was published in March (image above).